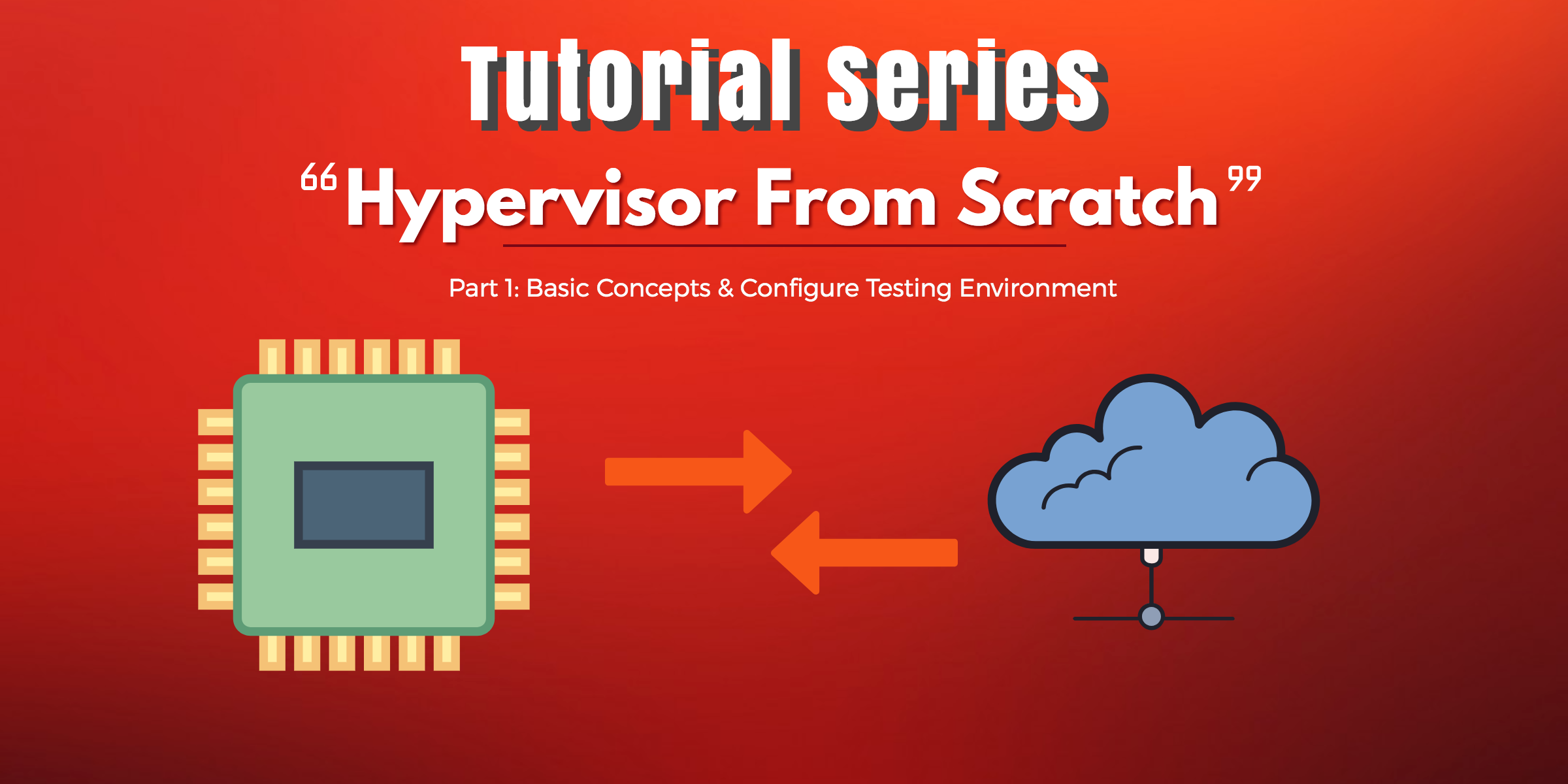 Notice: The Hypervisor From Scratch tutorial is completely revised in August 2022. Codes from all parts are updated, unnecessary details are removed, and new explanations and materials are added to the tutorial.

Welcome to the first part of a multi-part series of tutorials called “Hypervisor From Scratch”. As the name implies, this course contains technical details to create a basic Virtual Machine based on hardware virtualization. If you follow this tutorial, you’ll be able to create your own virtual environment and understand how VMWare, VirtualBox, KVM, and other virtualization software use processors’ facilities to create a virtual environment. Moreover, you can learn how the “VMM” module of the HyperDbg Debugger works internally.

The full source code of this tutorial is available on GitHub :

Both Intel and AMD support virtualization in their modern CPUs. Intel introduced (VT-x technology) that was previously codenamed “Vanderpool” on November 13, 2005, in Pentium 4 series. The CPU flag for VT-x capability is “VMX” which stands for Virtual Machine eXtension.

AMD, on the other hand, developed its first generation of virtualization extensions under the codename “Pacifica” and initially published them as AMD Secure Virtual Machine (SVM), but later marketed them under the trademark AMD Virtualization, abbreviated AMD-V.

There are two types of hypervisors. The “type 1” hypervisor is called a “bare-metal hypervisor” or “native” because it runs directly on a bare-metal physical server. A type 1 hypervisor has direct access to the hardware. With a type 1 hypervisor, there is no operating system to load as the hypervisor itself has the necessary functions to manage the system boot and startup.

The rest of these tutorials mainly focus on VT-x because Intel CPUs are more popular and widely used.

These concepts are platform independent, which means you can easily run the same code routine in both Linux or Windows and expect the same behavior from the CPU, but I prefer to use Windows as its more easily debuggable (at least for me.), but I try to give some examples for Linux systems whenever needed.

Linux kernel manages faults like #GP and other exceptions and tries to avoid the kernel panic and keep the system up; thus, it’s better to test something like a hypervisor or any CPU-related programs. In contrast, Windows never tries to manage any unexpected exception and shows a Blue Screen Of Death whenever an unexpected exception occurs; therefore, you might get lots of BSODs while testing your hypervisor.

Considering the fact that I might (and will) make mistakes like misinformation, wrong implementation, or forget about mentioning some essential explanations in these series, I should say sorry in advance, and I’ll be glad and open to every comment that tells me the mistakes in the technical details. You can use the comments below to notify me about these possible errors.

You can download the community (free) version of the Visual Studio:

After installing Visual Studio, you can get the WDK from the below link:

WinDbg is available in Windows SDK:

The next step is downloading OSR Driver Loader. We use this tool to load our driver. You can download it using the below link:

Finally, we need to download SysInternals DebugView for printing the DbgPrint() results. 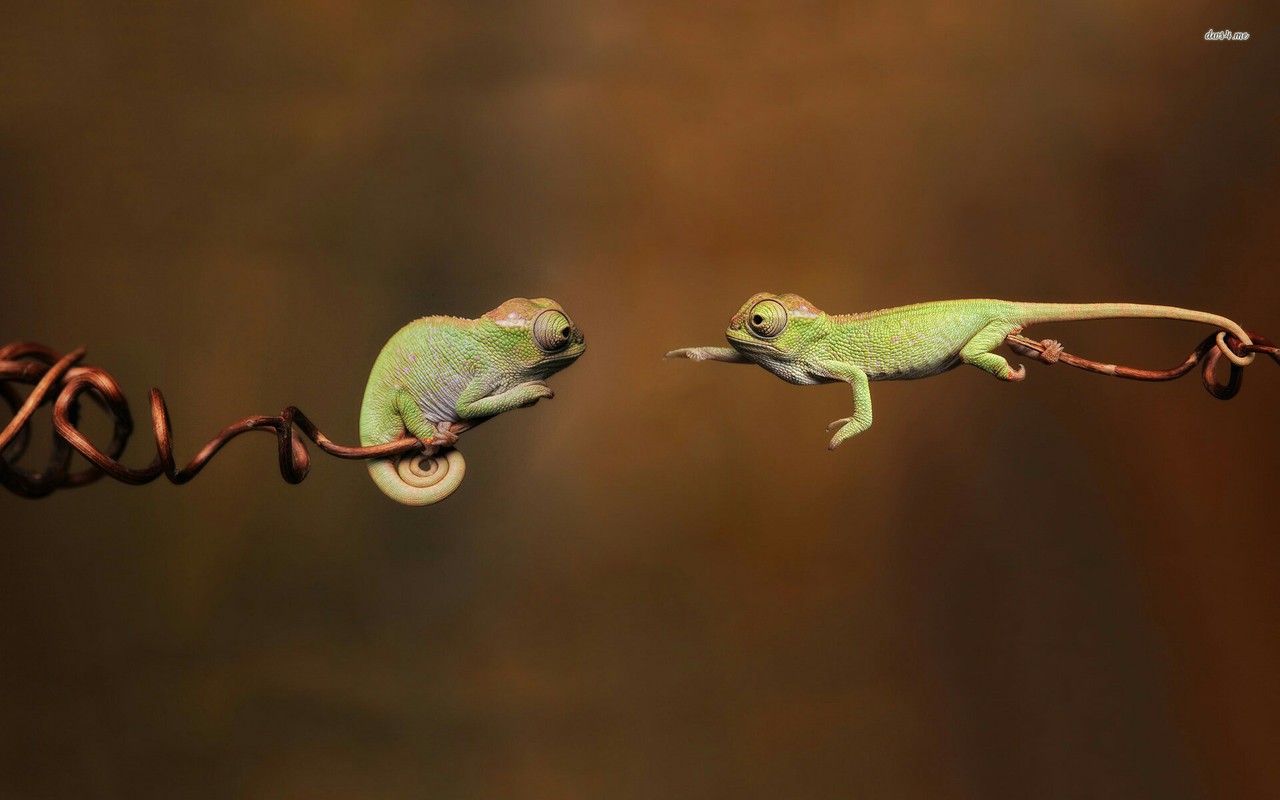 Most of the codes in this tutorial have to run at the kernel-level, and we must set up a Linux Kernel Module or a Windows Driver for this purpose.

As configuring a Virtual Machine Monitor (VMM) involves lots of assembly codes, we should be able to embed inline assemblies within our kernel project.

WDK (and also user-mode applications) no longer support inline assembly in an x64 environment, so we should be able to create a simple x64 project with the support for inline assembly codes.

I explained it step by step in one of my posts, so I highly recommend reading this topic to create a project with inline assembly support before continuing the rest of this part.

There is a good article here if you want to start with Windows Driver Kit (WDK).

For the first example, we’ll create an elementary WDK driver. In WDK, we need two essential functions, first is a Driver Entry function that works as a starting point where the driver starts its execution whenever it is loaded. The second is for Driver Unload, responsible for removing the objects used in the driver.

In the driver entry, our driver needs to register a device so we can communicate with our virtual environment from the user-mode. On the other hand, I defined DrvUnload, which uses the PnP Windows driver feature, and we can easily unload our driver and remove the device, then reload and create a new one.

The following code is responsible for creating a new device :

All in all, you can compile the following file to create our first WDK driver in Visual Studio (with WDK installed).

It contains a Driver Entry function which creates a device and registers the unloading routines. Whenever the driver is loaded, the DriverEntry function is called, and when we unload it, DrvUnload will be called. This function will remove the device that we registered before.

Starting from the next version, the source code of each driver is available at GitHub, and we’ll talk about different features in WDK drivers. Don’t worry if you still don’t have any idea about a Windows Driver. We’ll work on it later in the next part. Just make sure to set up the environment for now.

If you use Windows, you should disable Driver Signature Enforcement to load our driver. That’s because Microsoft prevents any not verified code from running in Windows Kernel (Ring 0).

To do this, press and hold the shift key and restart your computer. You should see a new window. 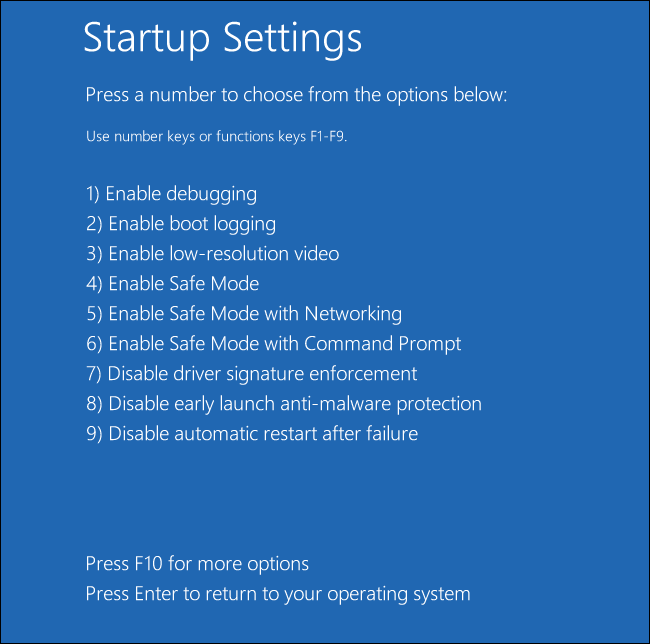 The latest thing I remember is enabling Windows Debugging messages through the registry. This way we can get DbgPrint() results through SysInternals DebugView.

In the Regedit, add a key:

Under that, add a DWORD value named IHVDRIVER with a value of 0xFFFF.

Reboot the machine, and it’s good to go.

What if you don’t have access to a separate physical machine?

In order to set up a nested virtualization environment, make sure to enable the following features in your VM. 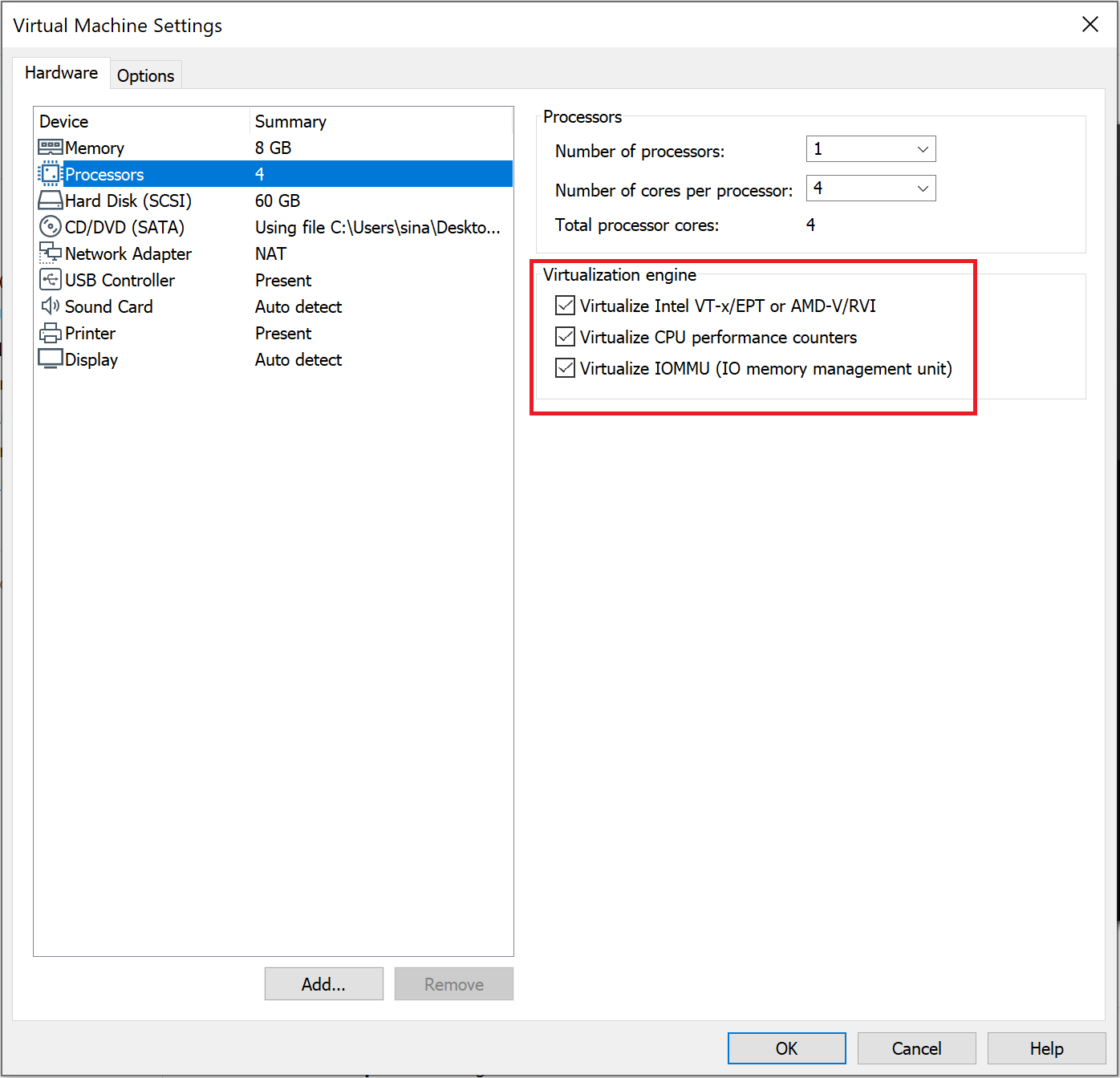 All the drivers are tested on both physical machines and VMware’s nested virtualization.

We will frequently use some keywords in the rest of these series, and you should know about them (Most of the definitions are derived from Intel software developer’s manual, volume 3C).

Virtual Machine Monitor (VMM): VMM acts as a host and has full control of the processor(s) and other platform hardware. A VMM is able to retain selective control of processor resources, physical memory, interrupt management, and I/O.

Virtual machine control structure (VMCS): is a data structure in memory that exists exactly once per VM (or more precisely, one per virtual CPU) while the VMM manages it. With every change in the execution context between different VMs, the VMCS is restored for the current VM, defining the state of the VM’s virtual processor and VMM control Guest software using VMCS.

I found a great work illustrating the VMCS. The PDF version is also available here. 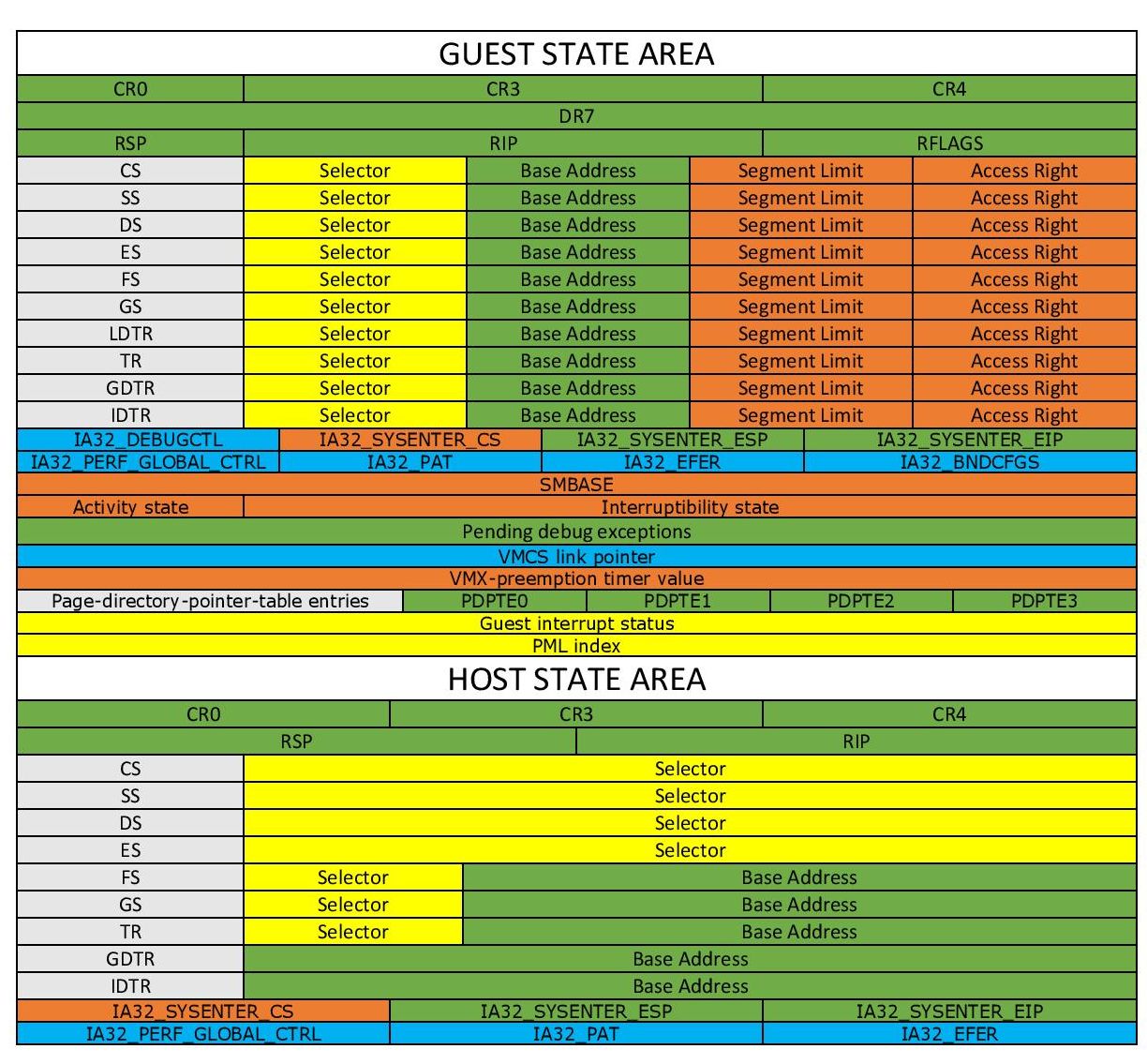 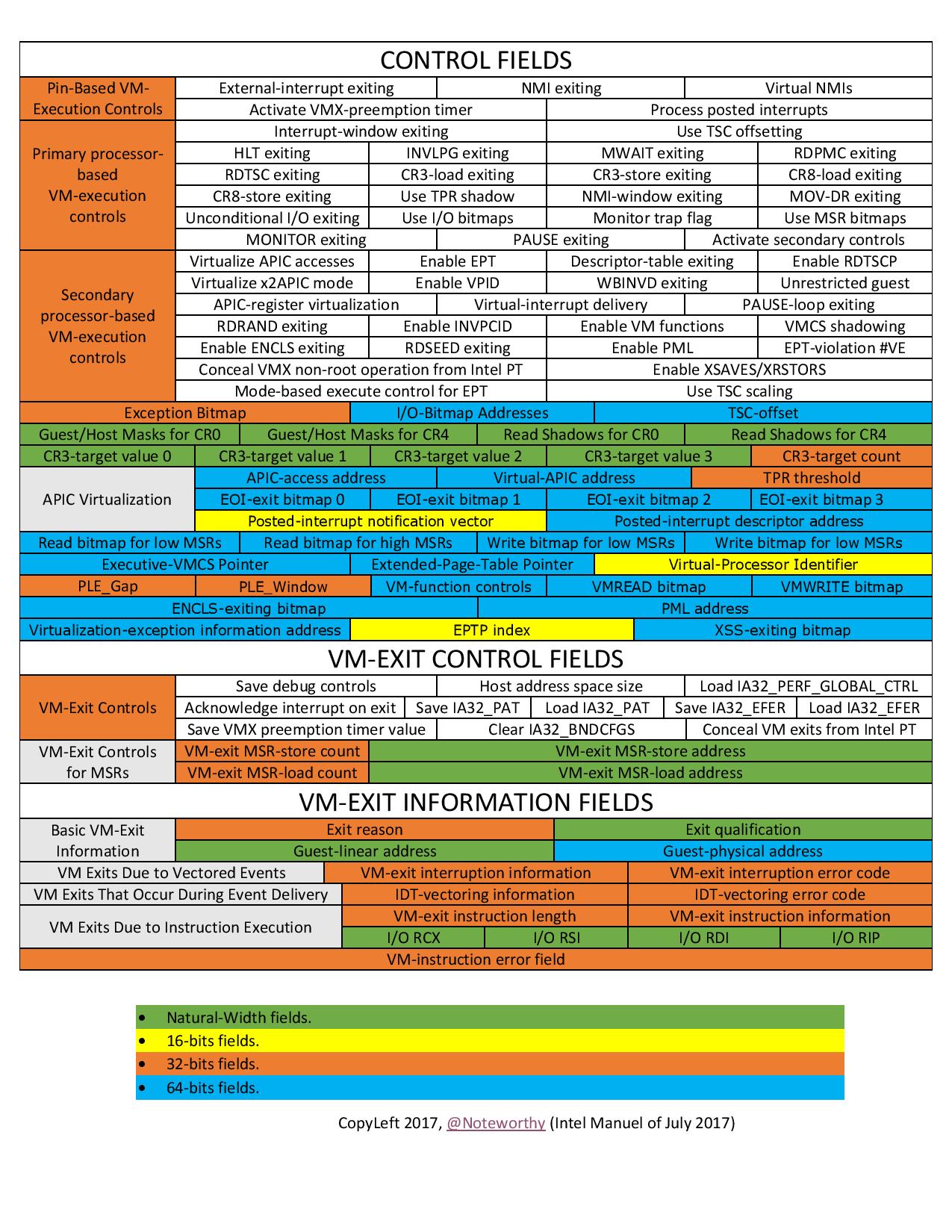 Don’t worry about the fields. I’ll explain most of them clearly in the latter parts. Just remember, VMCS Structure varies between different versions of a processor.

Other hypervisor-related works and materials.

7 Days to Virtualization: A Series on Hypervisor Development - (https://revers.engineering/7-days-to-virtualization-a-series-on-hypervisor-development/)

At last, if you want to use hypervisors for debugging, researching, or reverse-engineering, you can use HyperDbg Debugger, as many innovative methods based on hypervisors are implemented in this debugger that will help you in your reversing journey.

In this part, we study general keywords we should be aware of and create a simple testing environment for our future tests. In the next part, I will explain how to enable VMX on your machine using the driver we made above. Then we survey the rest of the virtualization, so see you in the next part.

[4] What Is a Type 1 Hypervisor? – (http://www.virtualizationsoftware.com/type-1-hypervisors/)

Introduction Hello and welcome to the 6th part of the tutorial Hypervisor From Scratch. In this part, we’ll learn how to virtualize an already running system using our custom-made hypervisor. Li...

A Tour of Mount in Linux