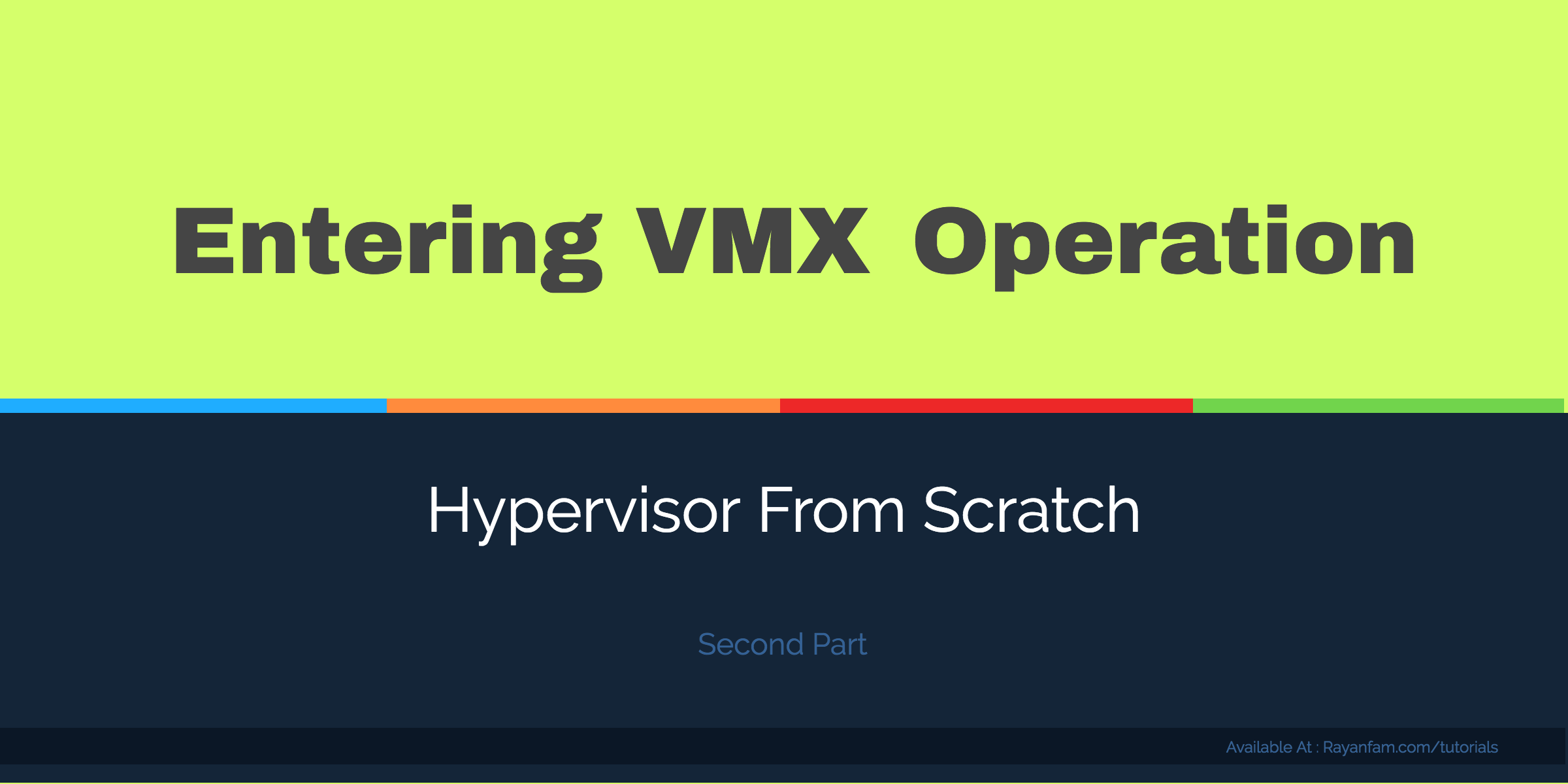 It’s the second part of a multiple series of a tutorial called “Hypervisor From Scratch”, First I highly recommend to read the first part (Basic Concepts & Configure Testing Environment) before reading this part, as it contains the basic knowledge you need to know in order to understand the rest of this tutorial.

In this section, we will learn about Detecting Hypervisor Support for our processor, then we simply config the basic stuff to Enable VMX and Entering VMX Operation and a lot more thing about Window Driver Kit (WDK).

The source code of this topic is available at :

Beside our kernel-mode driver (“MyHypervisorDriver”), I created a user-mode application called “MyHypervisorApp”, first of all (The source code is available in my GitHub), I should encourage you to write most of your codes in user-mode rather than kernel-mode and that’s because you might not have handled exceptions so it leads to BSODs, or on the other hand, running less code in kernel-mode reduces the possibility of putting some nasty kernel-mode bugs.

If you remember from the previous part, we create some Windows Driver Kit codes, now we want to develop our project to support more IRP Major Functions.

IRP Major Functions are located in a conventional Windows table that is created for every device, once you register your device in Windows, you have to introduce these functions in which you handle these IRP Major Functions. That’s like every device has a table of its Major Functions and everytime a user-mode application calls any of these functions, Windows finds the corresponding function (if device driver supports that MJ Function) based on the device that requested by the user and calls it then pass an IRP pointer to the kernel driver.

Now its responsibility of device function to check the privileges or etc.

The following code creates the device :

Note that our device name is \Device\MyHypervisorDevice.

After that, we need to introduce our Major Functions for our device.

You can see that I put “DrvUnsupported” to all functions, this is a function to handle all MJ Functions and told the user that it’s not supported. The main body of this function is like this:

We also introduce other major functions that are essential for our device, we’ll complete the implementation in the future, let’s just leave them alone. 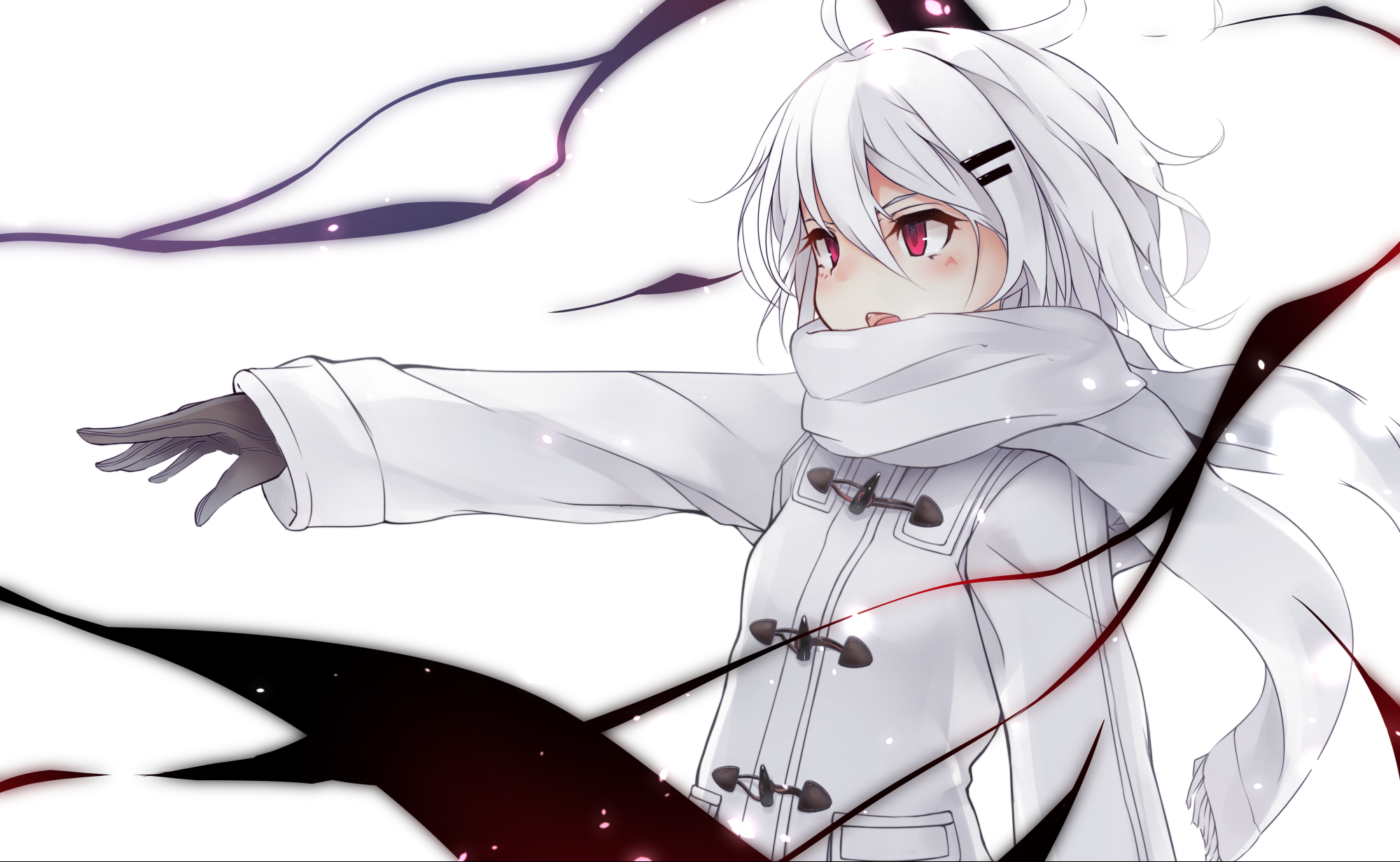 This is a list of IRP Major Functions which we can use in order to perform different operations.

Every major function will only trigger if we call its corresponding function from user-mode. For instance, there is a function (in user-mode) called CreateFile (And all its variants like CreateFileA and CreateFileW for ASCII and Unicode) so everytime we call CreateFile the function that registered as IRP_MJ_CREATE will be called or if we call ReadFile then IRP_MJ_READ and WriteFile then IRP_MJ_WRITE  will be called. You can see that Windows treats its devices like files and everything we need to pass from user-mode to kernel-mode is available in PIRP Irp as a buffer when the function is called.

In this case, Windows is responsible to copy user-mode buffer to kernel mode stack.

Don’t worry we use it frequently in the rest of the project but we only support IRP_MJ_CREATE in this part and left others unimplemented for our future parts.

We will need these minor functions later in these series.

A list of IRP Minor Functions is available below:

Fast I/O is specifically designed for rapid synchronous I/O on cached files. In fast I/O operations, data is transferred directly between user buffers and the system cache, bypassing the file system and the storage driver stack. (Storage drivers do not use fast I/O.) If all of the data to be read from a file is resident in the system cache when a fast I/O read or write request is received, the request is satisfied immediately.

The definition of Fast I/O Dispatch table is:

I created the following headers (source.h) for my driver.

In order to load our driver (MyHypervisorDriver) first download OSR Driver Loader, then run Sysinternals DbgView as administrator make sure that your DbgView captures the kernel (you can check by going Capture -> Capture Kernel). 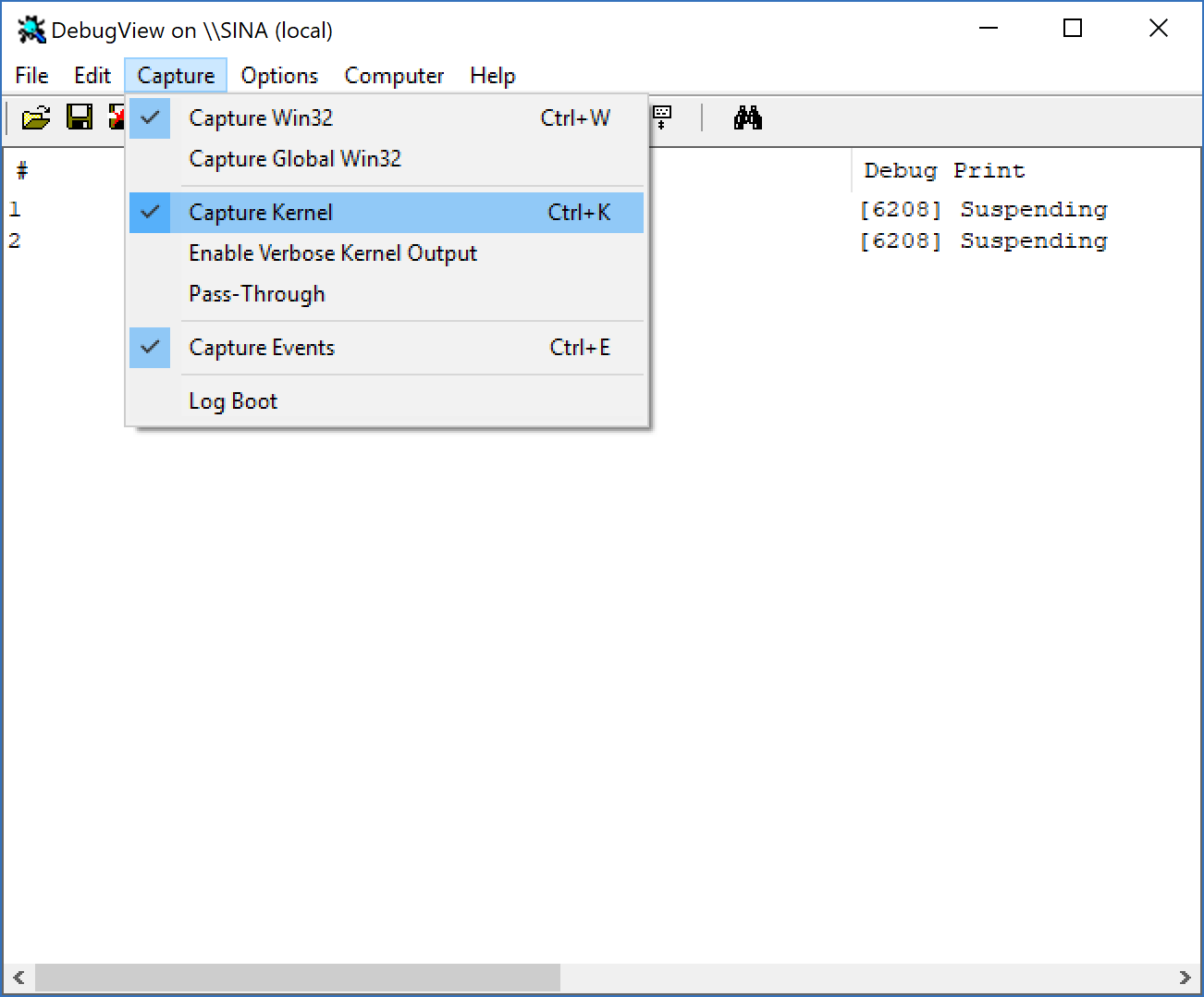 Please note that you should have WDK installed for your Visual Studio in order to be able building your project. 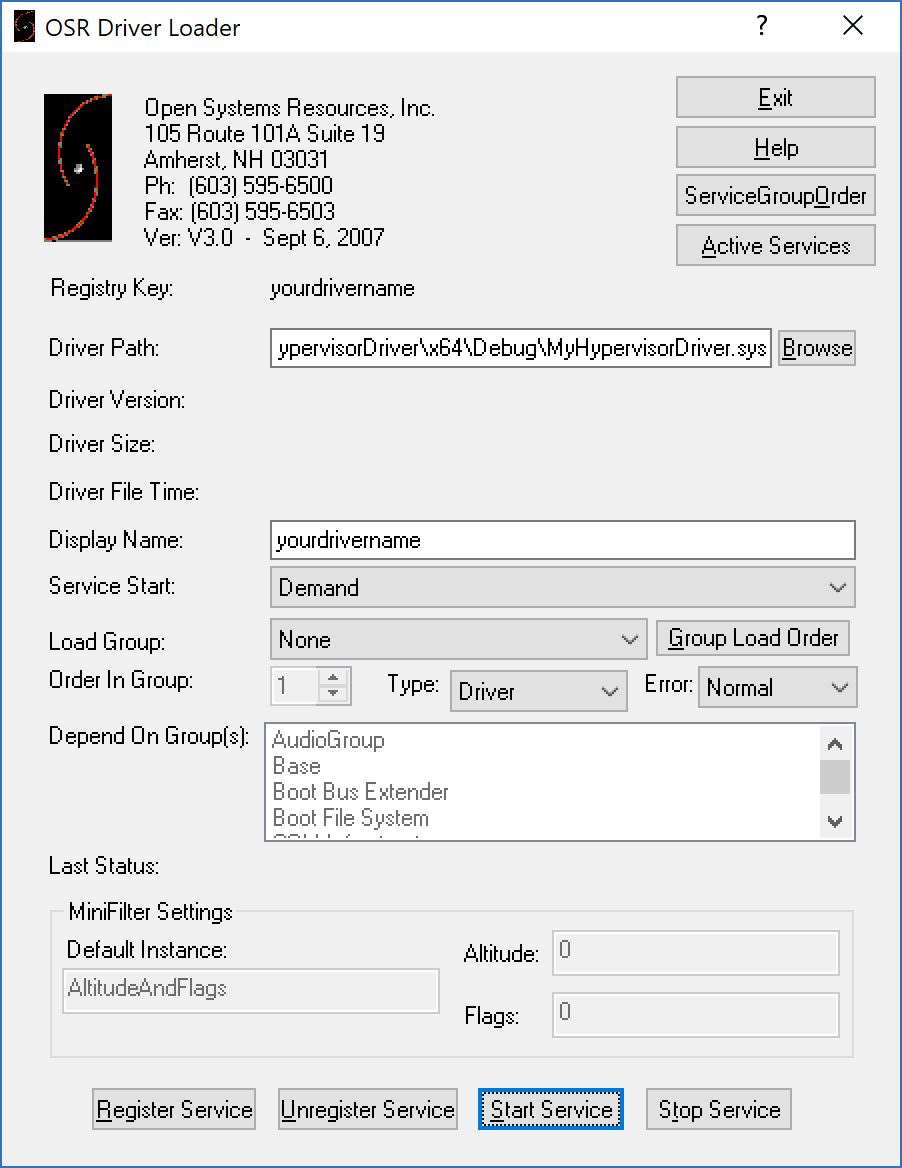 Now come back to DbgView, then you should see that your driver loaded successfully and a message “[*] DriverEntry Called. “ should appear.

If there is no problem then you’re good to go, otherwise, if you have a problem with DbgView you can check the next step.

Keep in mind that now you registered your driver so you can use SysInternals WinObj in order to see whether “MyHypervisorDevice” is available or not. 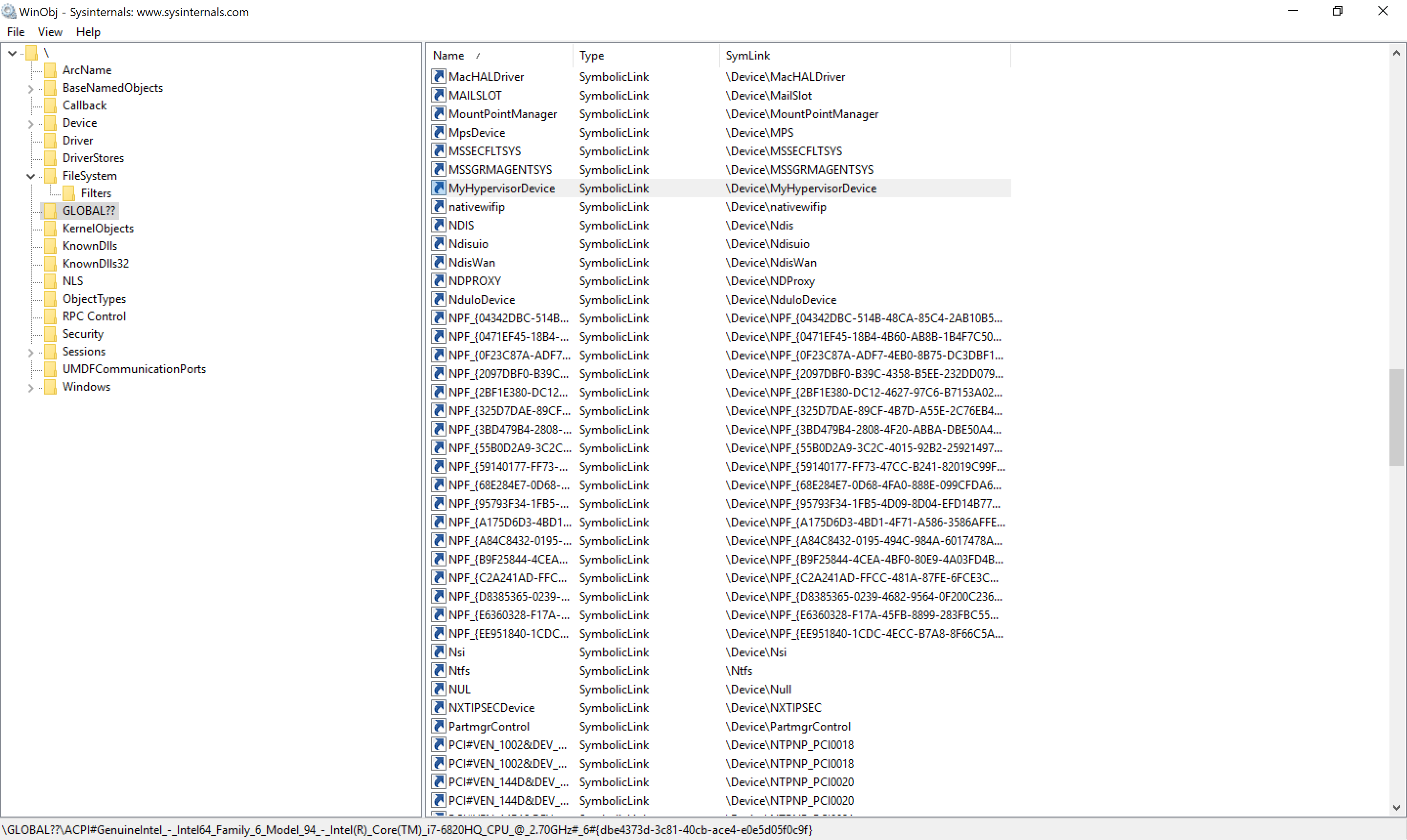 Unfortunately, for some unknown reasons, I’m not able to view the result of DbgPrint(), If you can see the result then you can skip this step but if you have a problem, then perform the following steps:

As I mentioned in part 1:

In regedit, add a key:

Under that , add a DWORD value named IHVDRIVER with a value of 0xFFFF

Reboot the machine and you’ll good to go.

It always works for me and I tested on many computers but my MacBook seems to have a problem.

In order to solve this problem, you need to find a Windows Kernel Global variable called, nt!Kd_DEFAULT_Mask, this variable is responsible for showing the results in DbgView, it has a mask that I’m not aware of so I just put a 0xffffffff in it to simply make it shows everything!

To do this, you need a Windows Local Kernel Debugging using Windbg.

After that you need to open Windbg with UAC Administrator privilege, go to File > Kernel Debug > Local > press OK and in you local Windbg find the nt!Kd_DEFAULT_Mask using the following command :

Now change it value to 0xffffffff. 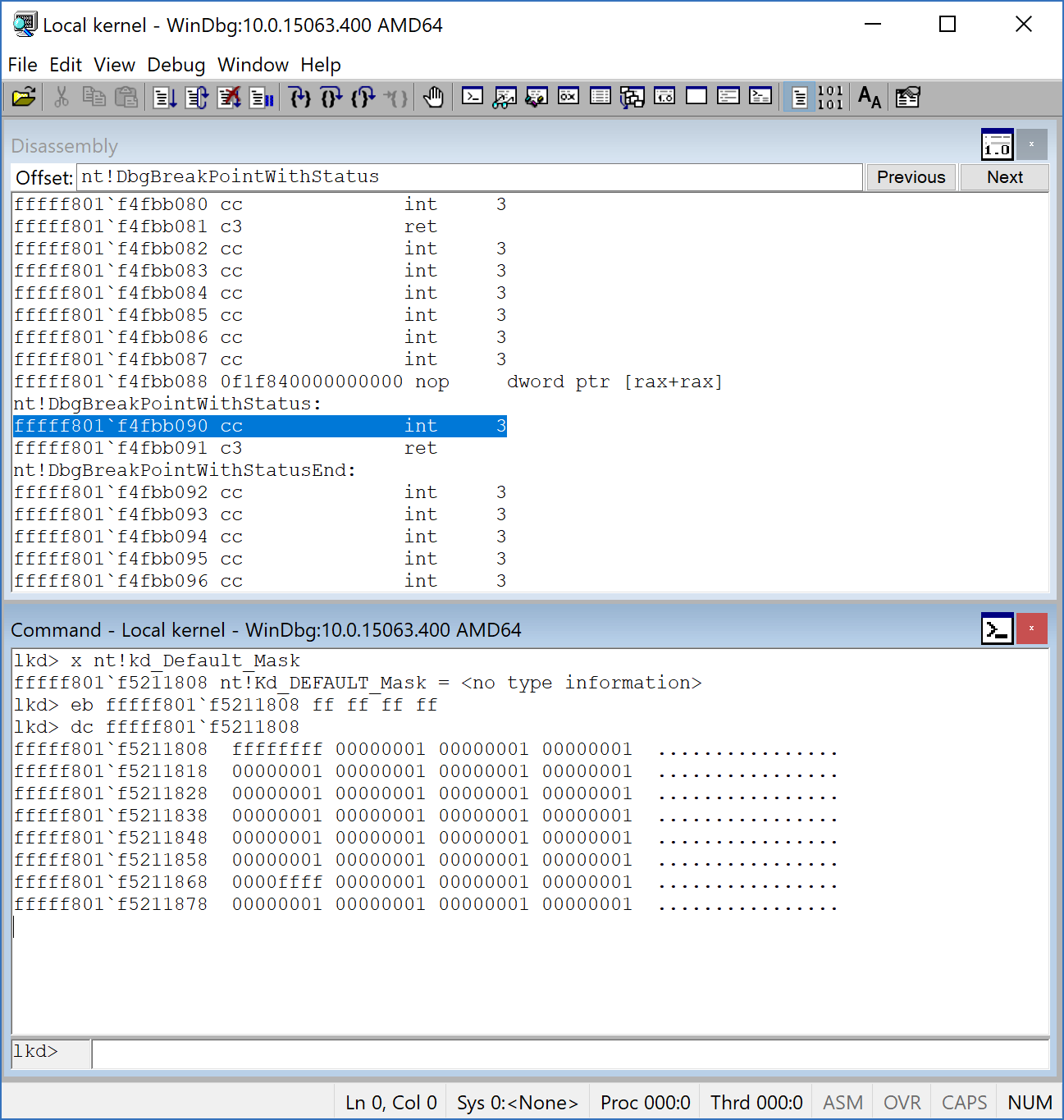 After that, you should see the results and now you’ll good to go.

Remember this is an essential step for the rest of the topic, because if we can’t see any kernel detail then we can’t debug. 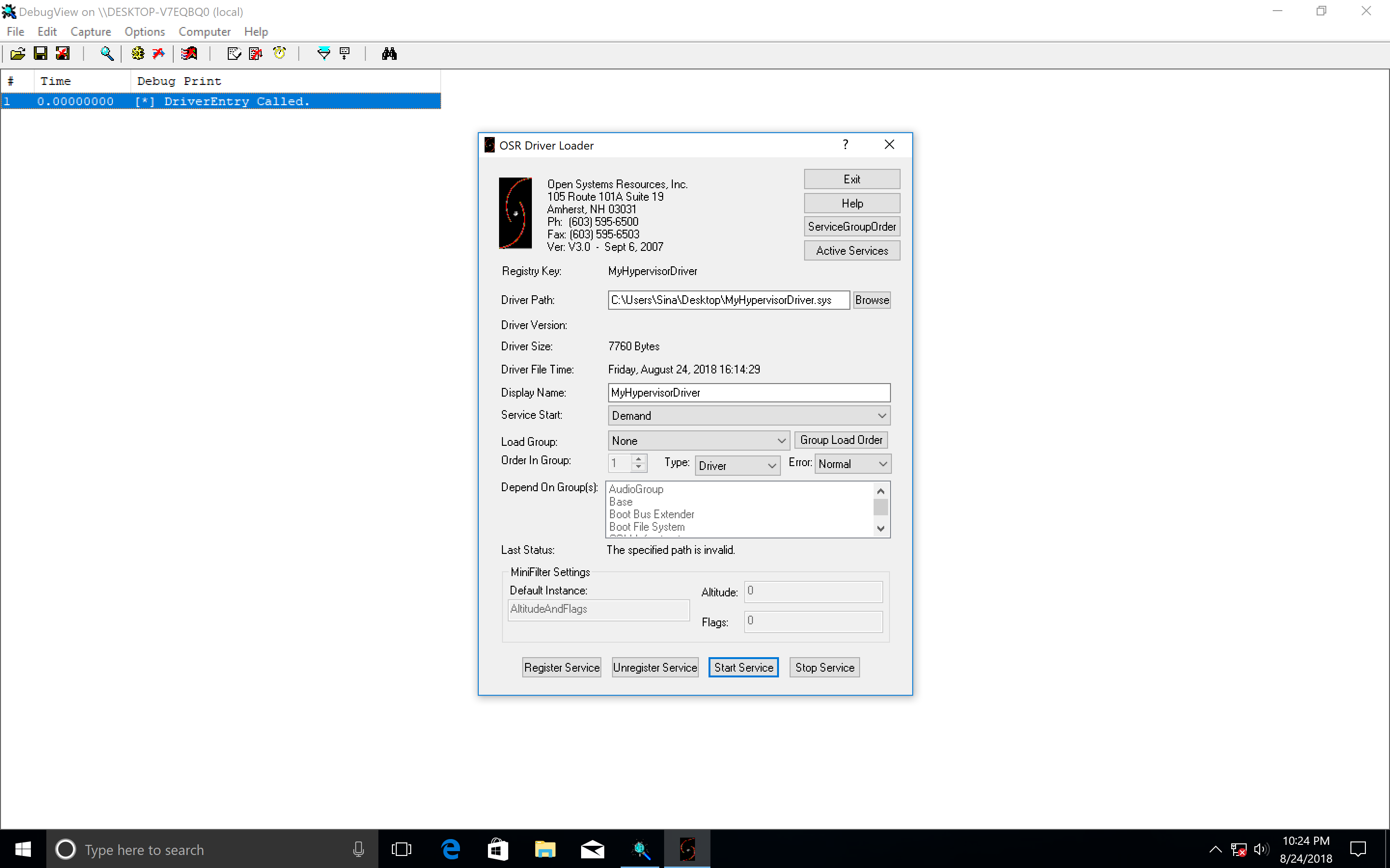 Discovering support for vmx is the first thing that you should consider before enabling VT-x, this is covered in Intel Software Developer’s Manual volume 3C in section 23.6 DISCOVERING SUPPORT FOR VMX.

You could know the presence of VMX using CPUID if CPUID.1:ECX.VMX[bit 5] = 1, then VMX operation is supported.

First of all, we need to know if we’re running on an Intel-based processor or not, this can be understood by checking the CPUID instruction and find vendor string “GenuineIntel”.

The last step is checking for the presence of VMX, you can check it using the following code :

As you can see it checks CPUID with EAX=1 and if the 5th (6th) bit is 1 then the VMX Operation is supported. We can also perform the same thing in Kernel Driver.

All in all, our main code should be something like this: 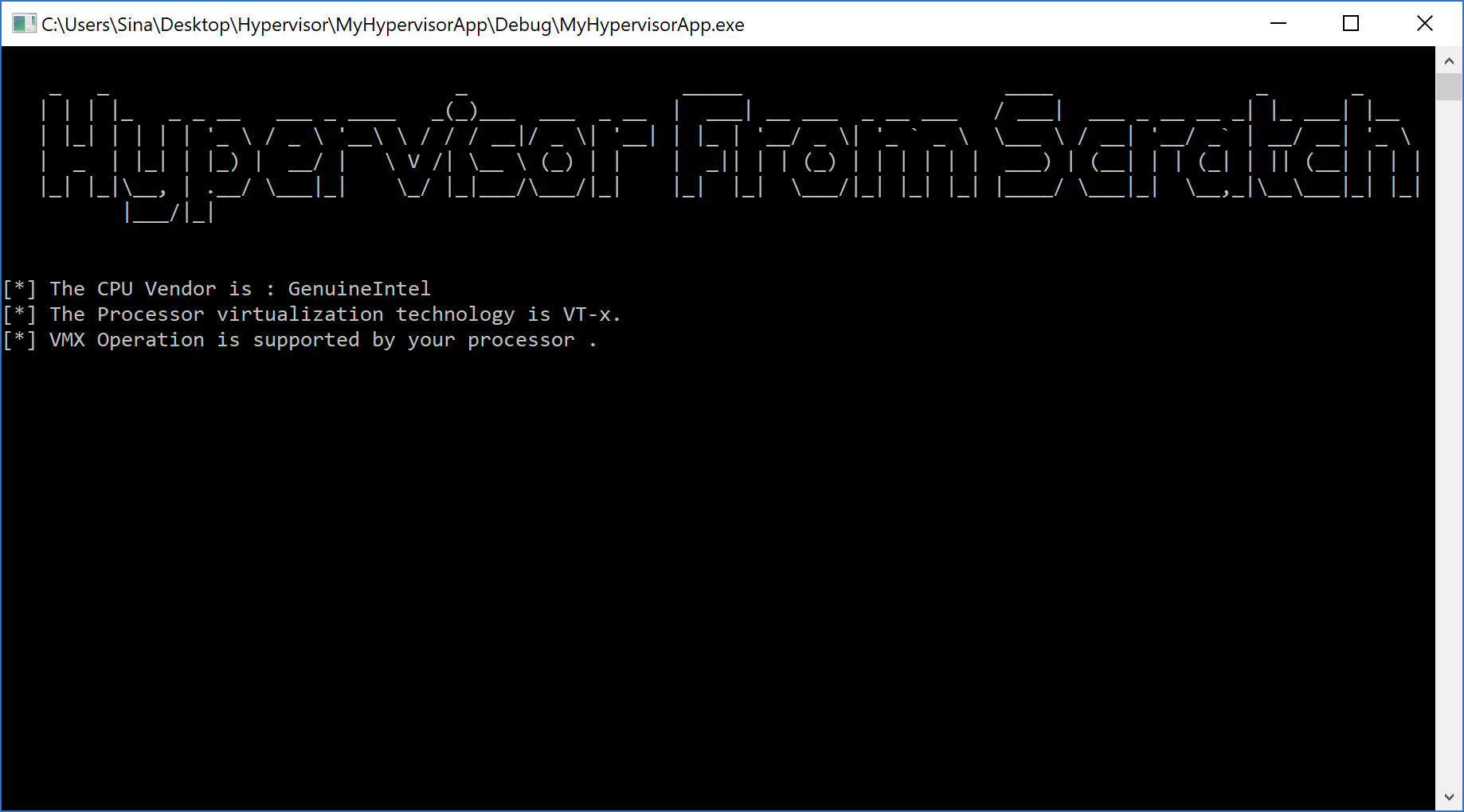 If our processor supports the VMX Operation then its time to enable it. As I told you above, IRP_MJ_CREATE is the first function that should be used to start the operation.

Do you remember the previous part where I told you how to create an inline assembly in Windows Driver Kit x64?

Now you should create some function to perform this operation in assembly.

Just in Header File (in my case Source.h) declare your function:

Then in assembly file (in my case SourceAsm.asm) add this function (Which set the 13th (14th) bit of Cr4).

Also, declare your function in the above of SourceAsm.asm.

The above function should be called in DrvCreate:

At last, you should call the following function from the user-mode:

If you see the following result, then you completed the second part successfully. 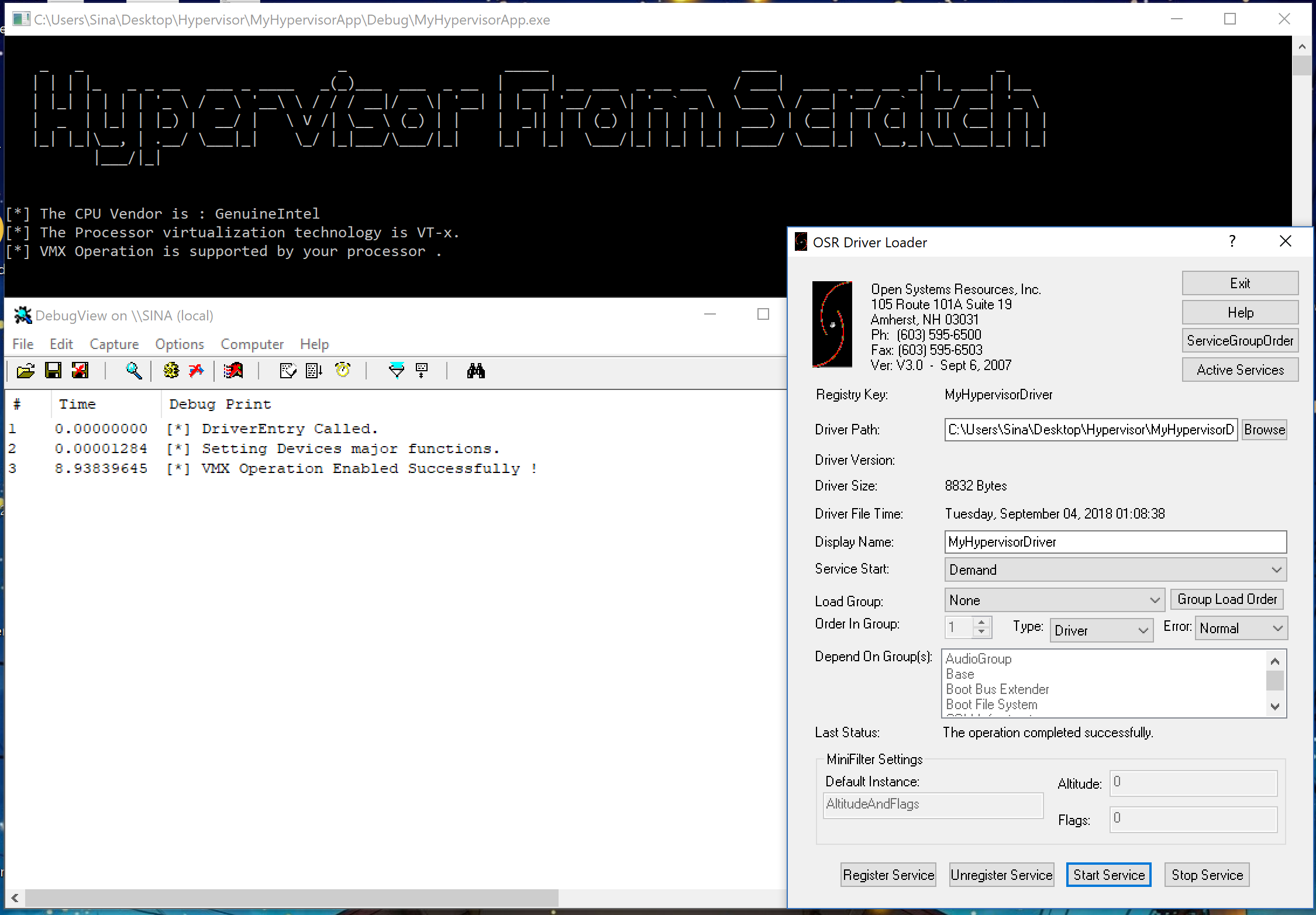 Important Note: Please consider that your .asm file should have a different name from your driver main file (.c file) for example if your driver file is “Source.c” then using the name “Source.asm” causes weird linking errors in Visual Studio, you should change the name of you .asm file to something like “SourceAsm.asm” to avoid these kinds of linker errors.

In this part, you learned about basic stuff you to know in order to create a Windows Driver Kit program and then we entered to our virtual environment so we build a cornerstone for the rest of the parts.

In the third part, we’re getting deeper with Intel VT-x and make our driver even more advanced so wait, it’ll be ready soon!

Note: Please keep in mind that hypervisors change during the time because new features added to the operating systems or using new technologies, for example, updates to Meltdown & Spectre have made a lot of changes to the hypervisors, so if you want to use Hypervisor From Scratch in your projects, researches or whatever, you have to use the driver from the latest parts of these tutorial series as this tutorial is actively updated and changes are applied to the newer parts (earlier parts keep untouched) so you might encounter errors and instability problems in the earlier parts thus make sure to use the latest parts in real-world projects. 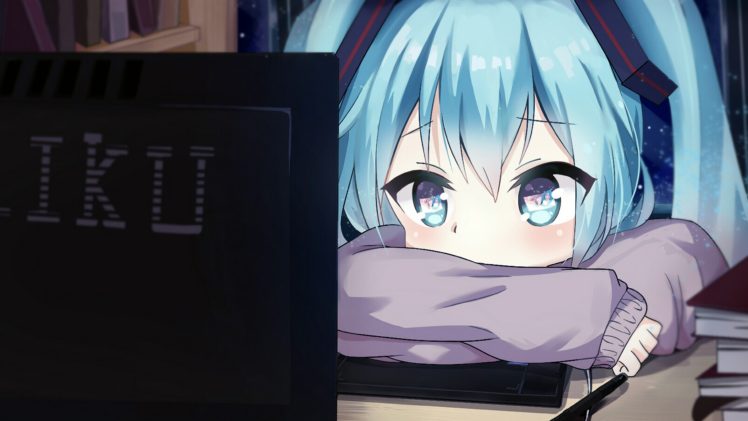 Hello everyone! Welcome to the first part of a multi-part series of tutorials called “Hypervisor From Scratch”. As the name implies, this course contains technical details to create a basic Virt...

Introduction Hello and welcome back to the fifth part of the “Hypervisor From Scratch” tutorial series. Today we will be configuring our previously allocated Virtual Machine Control Structure (V...

Introduction Hello and welcome to the 6th part of the tutorial Hypervisor From Scratch. In this part, I try to give you an idea of how to virtualize an already running system using Hypervisor. L...

A Tour of Mount in Linux